Before I start telling the story, I think it’s important to explain why we even wanted to learn our show in other languages in the first place.

Imagine how funny it would be if the situation was the other way around, if some French artist decided to learn his show in Hebrew and said words he didn’t really understand in a heavy accent.

I would run to watch that for sure!

Another reason is that we think it is important for the little kids in the audience (who don’t speak English yet) to understand us and be more involved in the show.

But, more than anything, we were looking for challenges. Working in the circus can be very demanding physically, but sometimes the brain stays a bit behind… There is nothing like learning a new language to get your brain working. (Spoiler alert: when it starts working after being rusty for some time, it hurts!)

Let's learn the show in French

In May 2016 we performed in a festival in South Korea, where we met a couple of super friendly Canadians named Kim and Dan who performed with their show ‘The Street Circus’. They told us that they can perform their show in six languages! It inspired us to try doing the same.

In May 2017 we were accepted for a cool project in the French part of  Switzerland. It included a tour of six cities as part of the National Week For Preventing Alcohol Use (yes it’s a bit weird, but that’s for another story…) We decided that for this project we would learn our show in French.

We started by writing the text of the show in order to create a script. We could have filmed a full show and rewritten what we had heard in the video instead, but we remembered the show by heart. Plus, it gave us a quiet evening together in which we performed our show…  for ourselves.

Finding a French tutor wasn’t hard, but after we sent him the script, the hard work began.

He translated the show and we had about eight sessions with him, each lasting two hours. In each session we learned how to pronounce the words correctly, and we rewrote the translation in a phonetic form, so we could memorize it. Then we started having problems with the gags in the show.

How can you be sure that the translation is still funny?

A French tutor is not a comedian or an actor. He doesn’t have the same background in street performance and circus that we do. He can translate the show literally as the text is written. But how could we make sure that the humor would not be lost in translation?

Here is an example for an argument we had:

We have a volunteer act in the show in which we cover him\her with a towel. At the end of the act, when I let the volunteer go, I say “You can keep the towel… I stole it from the hotel”. Anywhere we tell it, people understand the humor and react to it. But the French tutor insisted that this was not funny, and that the joke would not be understood in France since stealing is a big taboo over there.

We didn’t know what to do. We believed in the joke. The situation became worse when he made the effort to ask his mother and grandmother, who had both lived in France for many years, about the joke. They agreed that we shouldn’t use it…

A joke is not just about the words. It’s also about the rhythm and the sound of what is being said. It depends on the grammar of the language and the vocabulary you choose to use. Of course, there is the cultural aspect as well, but people are people.

Eventually we insisted on keeping the joke. Let me tell you a secret –  it worked! The French audience loved it. But i’m skipping ahead.

There was so much more work during the process that we almost quit.

I want to quit

Apparently it was even harder than I had thought. Yes, we had a translation of every word in the show for English and French. The sentences were rewritten by the French tutor, and made sense. But then came the phase of rehearsals and memorizing, which was really difficult.

Instead of quitting, we started editing.

I practiced on every person I met who knows French. I tried random sentences from the show, such as : “Qui rase les aisselles?” which means- “Who shaves their armpits?” Or “je transpire, alors ferme ta bouche” which means “I am sweating, so you should close your mouth”.

The show got shorter and more precise. I began to understand what was funnier and how to make people laugh.

It took us about a month, and we spent 400 euro on private lessons but it worked! In one month we performed 16 successful shows in French and we wanted more!

So here is what we did after…

When we returned to Israel we found a German tutor and repeated the process. It was another difficult month. It was frustrating all over again. 500 more euro, and again new insights about the show. This time was easier though. I knew from the start that we could do it and that the hard work was worth it.

When you change the language of the show it becomes a different show. Suddenly some jokes are not so funny, and others are funnier!

For example, abroad, the towel joke is funnier because it makes more sense. I was actually in a hotel before the performance (I know what you’re thinking and the answer is no! I didn’t really steal towels from the hotel).

In German the grammatical structure of the sentence is very different from the Hebrew structure. They speak like Yoda from Star Wars. The towel joke is said “du kannst das handtuch behalten ich habe es vom hotel geklaut” which means “You can the towel keep, I from the hotel stole it”. It’s funnier because the punchline of ‘stolen’ comes at the very end of the sentence.

German came more easily to me. Maybe because of my Ashkenazi genes. Ya-Ya related to French better, which only strengthens my theory.

In the summer of 2017 we performed our show in German over 50 times. The show got better, we collected more money in our hat, the audience laughed, enjoyed the show and above all appreciated our efforts. We even won the Public choice Award in Switzerland!

People came up to us after the show and started speaking German, as if we really understood. When we explained that we knew only the text of the show and not a single word beyond it, they were shocked and couldn’t believe how we did it! If only they knew that learning the show in a foreign language took one month, but learning to stand on one hand took four years…

No need to say, we also kept the new version for our shows in Israel.

Today, when we create a new act we immediately think how to summarize it. If a joke stops working or the rhythm of the show becomes slower I remind myself to stick to the script.

We try to apply the principles we learned with about speed of speaking, intonation and precise wording which make the joke funnier and more surprising, in Hebrew as well.

In order to study the show in Italian we used Google Translate, and then got help from a volunteer in Italy to perfect it. We already knew some Spanish from the two years we studied circus in Spain.
Today we perform our show in seven different languages. The next ones will be Arabic and Japanese.

It always amazes me that the words are still fresh and ready to come out at any moment.

When most of us feel comfortable on stage we ignore the script and start babbling, which ruins our show. So I can say that the most important thing I learned in all this process is what not to say.

The same joke in 4 different languages

The same joke in 4 different languages 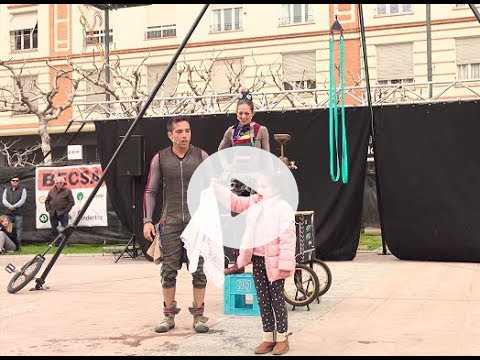