In May 2016 we flew to South Korea to perform for the first time. We didn’t know what to expect and we were very excited about the trip.

South Korea is located  11 hours direct flying time from Israel. The time difference is six hours. The culture and living pace is so different over there, and obviously the language as well.

We landed at the airport in Seoul, and the organizers of the festival met us and took us to the festival’s location and to our hotel. After we had settled in our room, we went for a walk around the city and the area of the festival. Since our show was scheduled for 4 pm the next day, we decided to spend the day resting and relaxing, and to deal with preparations for the show the following morning. We would have half a day for arrangements, no pressure…

When we got back to the room, the local time was 9 pm and we were so exhausted from the journey that we fell asleep with the lights on, without even having dinner.

At 1 am I woke up extremely hungry. I knew I wouldn’t survive the night without eating something. There is a Hebrew saying:  ‘Whoever eats alone, dies alone’. So I woke Ya-Ya up, and asked her to join me outside for a night walk in the city.

We went outside to hunt and gather food. There are so many things to see in Seoul. Everywhere you look, there is something different and colorful.  There are huge colorful screens on all the high buildings, showing commercials that light up the night. It’s a city that never sleeps. We got excited and adventurous. There was no way we’d manage to get back to sleep any time soon.

It took us three hours of wandering before we got tired again and went back to sleep in the early  hours of the morning.

I woke up later, after a good night’s sleep. The time shown on my computer was 8 am – the time I usually wake up in Israel. I can’t sleep when it is light outside. I let Ya-Ya sleep a little more while I played computer games (I’m such a thoughtful partner).

At 9 am I woke Ya-Ya up, so we could start getting ready slowly. She woke up and checked the messages on her phone. Suddenly she told me “Gal Baz, my phone says it’s 3 pm!”. I told her confidently,  “Your phone probably didn’t sync with the local time. It’s 9 am now…look”.

I opened the web on my computer and googled “What is the time in Seoul right now?”.

What a mess! We were still in bed and we were supposed to perform in an hour and nothing was ready yet. All our suitcases were packed in our room and we were half an hour’s walking distance from the festival area. What were we going to do?!

We jumped out of bed quickly and left the room, carrying  all our equipment in our hands, hoping we hadn’t forgotten anything.

In the alley near the hotel entrance we found an abandoned supermarket cart. As I was running with a backpack on my back and holding two suitcases, an idea came into my head… We quickly put all of the suitcases in the cart and started running without looking back.

It helped a lot because we managed to get to the festival area in only twenty minutes!

The time was 3:35 pm and we were standing in front of the stage. We started to organize our show while another company was performing. But something felt strange though…

According to the programme we had seen yesterday, there wasn’t supposed to be another show on the stage before us. Plus, we couldn’t find the translator, who was supposed to be waiting for us, anywhere at all.

Suddenly, after two minutes, which felt like forever, we saw two girls running towards us, shouting: “Duo Looky, Duo Looky!”. They were the producer of the festival and our translator. They explained that we were at the wrong stage and that they had been looking for us for the past twenty minutes.

We put our equipment back into the cart and ran after them. We reached the right stage 300 meters further on… The time was 3:50 pm. We had only ten minutes left before the show was to start and we weren’t even dressed.

The Korean audience is very disciplined and enthusiastic. About 1000 people were already there sitting in a half circle, waiting for us.

I thought how embarrassing it would be to make such a bad impression on the organizers. What a lack of responsibility! There was no way for us to start on time.

Suddenly, three of the production staff jumped up and started helping us get organized. They literally dressed us up and taped neck mics on to our cheeks. We just stood without moving and gave instructions to the translator, who passed them on in Korean to the crew.

And the lesson is...

We were super-excited and full of Adrenalin! We had shifted from failure to success, from mistakes to solutions in just a few minutes.

We had huge smiles on our faces. It was so great to start a performance this way.

We began making our way on to the stage when suddenly the producer stopped us and asked us to wait. She said “It is 3:58 pm now, and you should start at 4:00 pm. It’s very important to be exactly on schedule”. 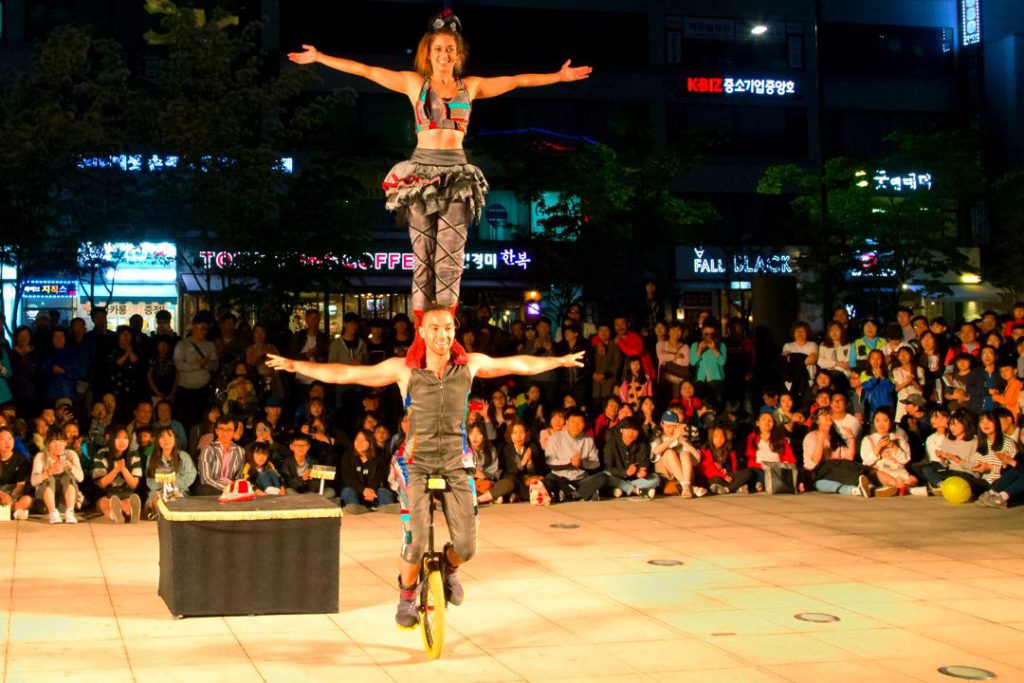