Even before I learned how to stand on two hands, I dreamed of standing on one hand! 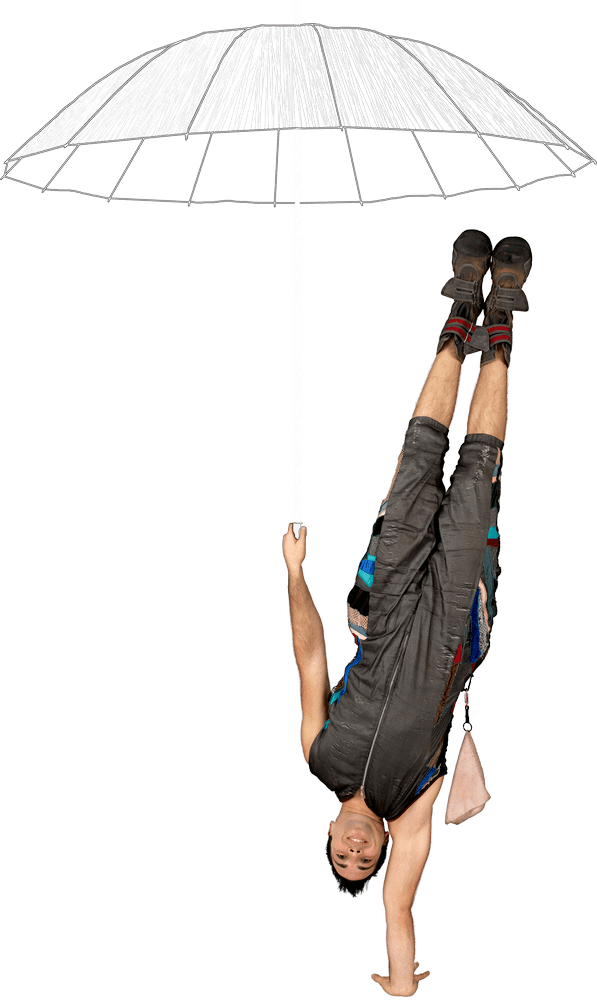 In 2007, I discovered YouTube for the first time. I was a little under 18 years old. I remember that one of the first videos I saw on YouTube was of someone doing a handstand on one hand. I was totally mesmerized by it .. I thought “how is that even possible?!” It seemed to contradict all the laws of nature. I have never seen anything like this in video or in real life.

I started binge watching all the videos I could find of people doing this incredible fit of strength and balance.

After sucking enough inspiration from the videos, a vision began to form in my mind.

I am going to do it too!

I admit, the amount of times in my life that I have thought “I am going to do it” about something, only to forget about it an hour later is huge. But this time felt different!

It’s important to note that there were many times that I thought, “This time it feels different”, and basically I was wrong and it was exactly the same ..

Anyway, I typed in the YouTube search bar “Tutorial how to do a one handed handstand” and clicked enter. The first video I saw gave me tremendous hope and motivation.

The video explained very simply and briefly that in order to learn a one handed handstand, you must first stand firm on two hands for 30 seconds. It goes on to explain that once you can hold steady for 30 seconds, you can start to transfer your weight to one hand and within a few weeks of training you will be able to stand on one hand.

This was absolutely a big, fat LIE!

But at that moment I believed every word and decided: I’m going to stand on one hand No matter what!

I had some background in acrobatics and handstands from the time I was in Capoeira class when I was 13. Apparently that helped, because I taught myself to stand on two hands pretty quickly… After just one month of training I could do a normal handstand for 30 seconds without moving. I thought I was well on my way to achieve my ultimate goal.

Time moved on and weeks became months of training. Although my normal handstand has greatly improved, standing on one hand was still impossible as ever.

Why doing a one arm handstand is so difficult?

Now it is time to take a moment to explain what it means to stand on one hand.

When we stand on our feet, we constantly, without thinking about it, balance ourselves back and forth and “save” ourselves from falling.

If we turn off the instinct that saves us from falling, we become like a broomstick that is place perfectly perpendicular to the floor.

In the first second after letting go of the broomstick, it seems to be in balance .. But very quickly the broomstick gets tilted in a certain direction and it’s fall is accelerated. From the time we leave the stick until it hits the floor it can take 2-3 seconds. Same with standing on one hand – a long fall can take even 5 seconds but it is still a fall and it does not have a moment of control or balance.

Therefore, so we don’t fool ourselves, a one arm handstand is considered only after 10 seconds. 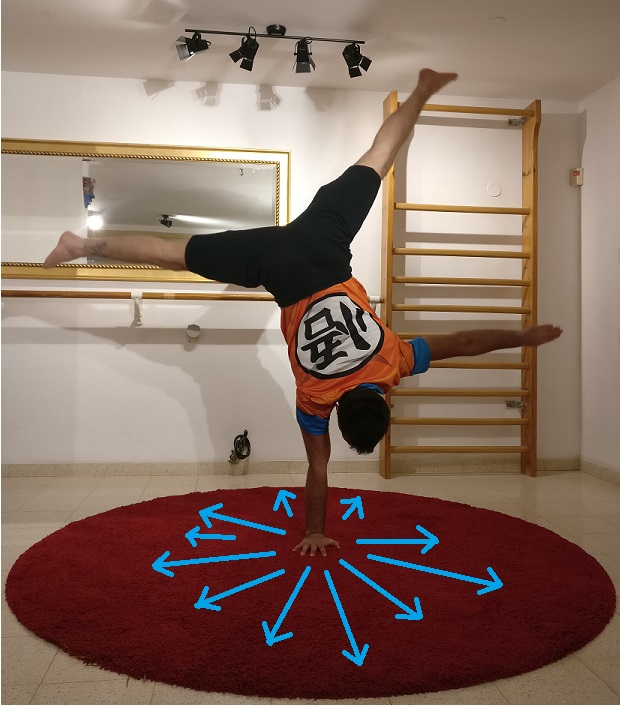 Back to the story ..

One year into my journey had passed. I was exercising about 3 times a week regularly. I learned all kinds of poses, power skills, and different ways to get in a handstand position. I even managed to stand without moving for more than one minute.

All this time I believed in that tutorial video that promised that if I just practice a little more I would succeed. But my recruiting date to the army had come and my dream of standing on one hand had to go into a deep winter coma.

For the next 3 years, I nearly practiced at all, until one day I met Ya-ya…

Ya-ya got me out of hibernation .. Yes in our story, I am the beautiful princes and she is the knight who wakes the princess with a kiss.

Ya-Ya was studying at the “Sandsiel” circus school in Israel. We started playing and practicing together.

One day I went to see where she was studying circus. She trained and I did handstands on the side. I thought I was doing great but then one of the teachers there named Yogi told me I had a “banana” line and that it was not a good technique. Yogi explained that banana line is an old school technique and today it is common to stand in a straight line. Basically banana = crooked. Straight is more aesthetic and also better for more complicated exercises like one hand.

I didn’t need much convincing.. Nobody calls me crooked and gets away with it! 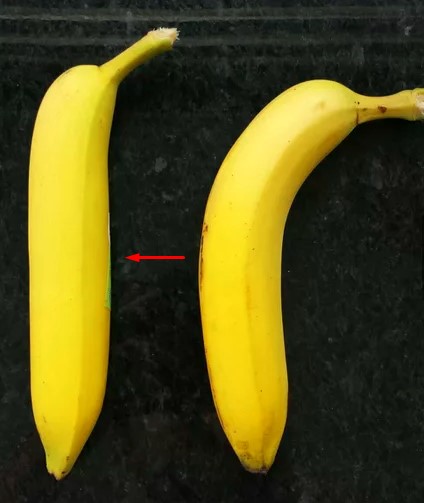 At that training session there were all kinds of circus students who recommended that I go to a class with a teacher named Odelia Goldsmith. They said she knew how to stand on one hand and that she would fix my handstand.

I called Odelia and set a private lesson. In class, Odelia was very impressed with the level I reached on my own. She gave me exercises to work on to “open my shoulders” and straten my line. Mostly wall-assisted exercises .. because a wall is straight.

After the class, I felt very uncomfortable with the new posture. There were A LOT of details to focus on and every time I concentrated on one, I forgot another. I couldn’t stay in balance for more than 15 seconds ..

After a week of training I regained all my abilities and this time in a straight line like a wall!

I got my motivation back and started training 5 days a week. I was still in the army so it was not so easy to find the time.

I would say that I was going out for a run but actually practiced handstands and flexibility. I think the weight of the military shoes strengthened my endurance.

Handstands are kind of the opposite of running in that you try to stay in one place and move as little as possible.

Needless to say, my commanders did not like me doing circus at the base, but somehow we came to an understanding. 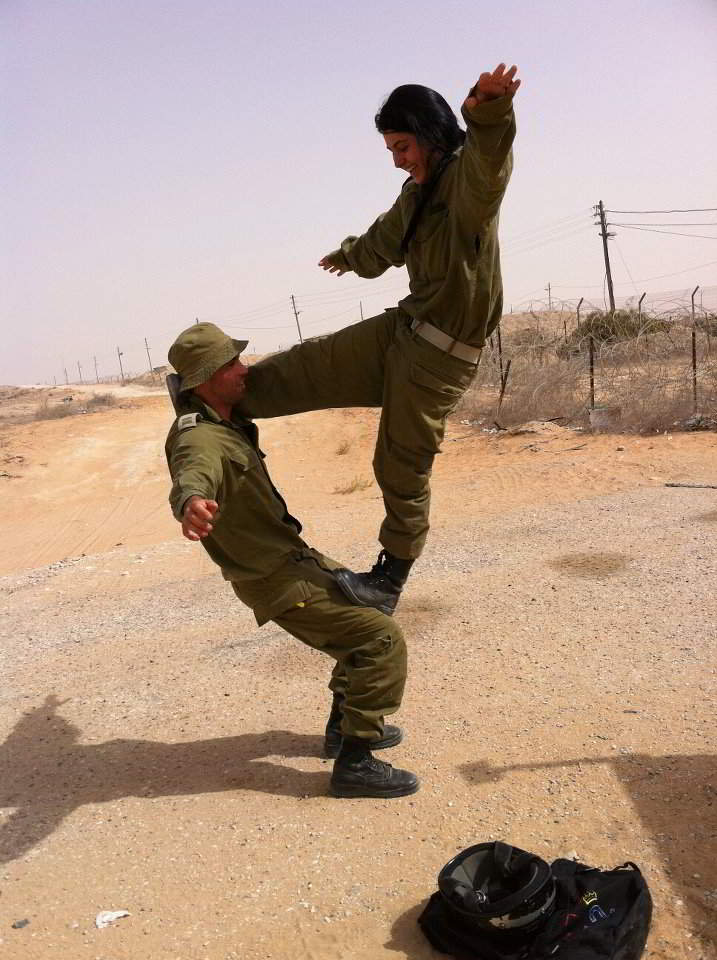 After 3 months of training, I felt that I had exhausted all the exercises that Odelia had given me and it was time for another lesson.

In the second class with Odelia I got homework to start working with cubes. Cubes are rectangular palm-sized pieces of wood used for lots of strength and control exercises for standing on one hand. Cube exercises feel like playing and training becomes more fun.

It is important to enjoy the road and especially if it is a long one.

The journey to one-handed control takes so long that those who do not enjoy simply do not endure. But persevering is not enough…

Practicing on the cubes at an airport 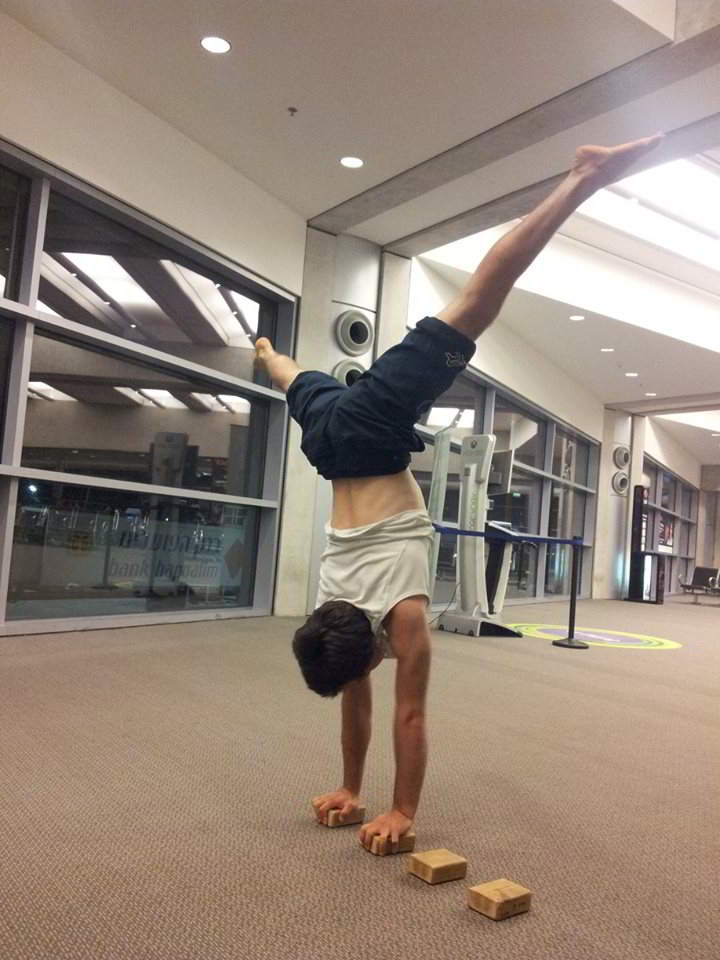 Through Odelia I met 2 more handstand teachers, Yuval Oz and Yuval Ayalon. Both were taught by a great master of balance named Claude Victoria, who lives in France. Claude has taught almost all of the western world’s most successful hand-balancers.

I took a few lessons with each of the Yuvals and got a few more new tips. Mostly, I got positive reinforcements that I was on the right track.

Ya-ya and I decided  to dive deeper into the circus world. Together we flew to Spain to study at “Crampa” Circus School. At that time, I could stand on one hand while the other hand only touching the floor with one finger. A six-finger handstand J

I started going twice a week to Vasily’s handstand classes. Vasily is the all-knowing teacher of “Crampa.” He attended Moscow Circus Academy in the 1970s.

Vasily’s approach to handstands is very Russian.
Tough, Technical, Tear-less (No whining).
What does not work with force works with more force.

After 3 months with Vasily I felt that all this stress was not fun and I went back to training alone. 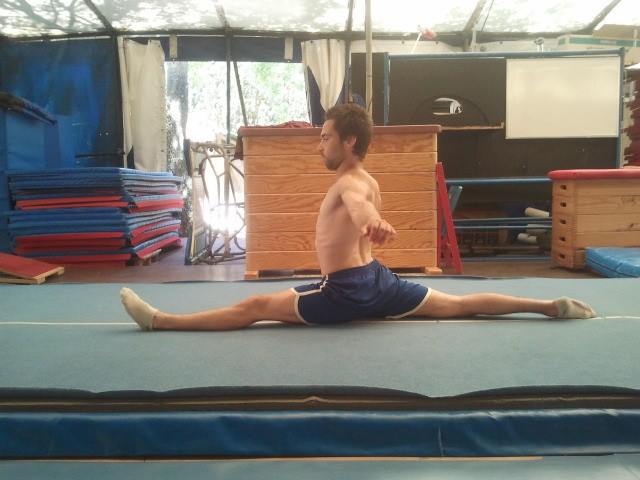 I finished the first year at the circus school. I saw friends at school that started training a lot after me and started to succeed at one hand. It felt so frustrating!

I thought “Why am I the only one stuck in place? I am working so hard why is it not happening already ..” but I had invested too much to quit. I decided to go to the origin. I’ll go train with Claude.

After a short flight to Paris and another four-hour train, I landed at Claude’s house. Claude was 83 years old, lived alone in a small village in eastern France. He used to host students from all over the world at his home. Max 3 at a time.

Claude’s schedule consisted of morning workouts and evening workouts. In between eating and resting. Claude cooked all meals. On average 5-6 hours of training each day.

I asked: “Claude how many days a week should I train?”
His response was: “How many times does your dad go to work?” 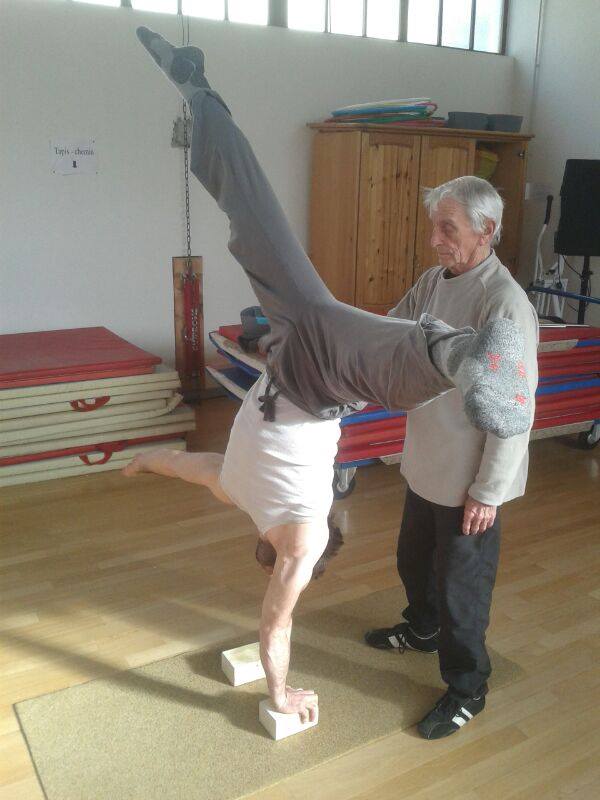 Claude’s living room walls were full of pictures of him and his students doing crazy acrobatics. It wasn’t an exaggeration what I heard from everyone. He was truly a Balance GURU!

Claude told me to stop training strength and conditioning. He said, “You are ready. Everything is accurate. You just have to go for it and concentrate.”

I learned from Claude a new approach to training:
No matter what exercise you do, it’s important to breathe gently, stay focused, and clear your head. Be patient and sensitive to any electrical signal passing through the body. Maintain strong muscle tension but move softly. Every exercise and set must end successfully and not to fall.

I call it “Don’t be greedy!”.When you are successful and the exercise goes well, do not try something new and more complicated. Finish nicely and in control.

After five exhausting days, I returned to Carampa feeling fresh and confident. A week after I returned from Claude it happened!

I felt like a hero for the first time discovering his powers. Standing on one hand in control felt like I was Hercules, Superman and Chuck Norris all together! I felt like I was holding the whole world in my hand.

It took me a few more months to gain control and consistency in the exercise until I was able to hold 10 seconds in my right hand. A few more months passed, and the left hand closed the gap as well. 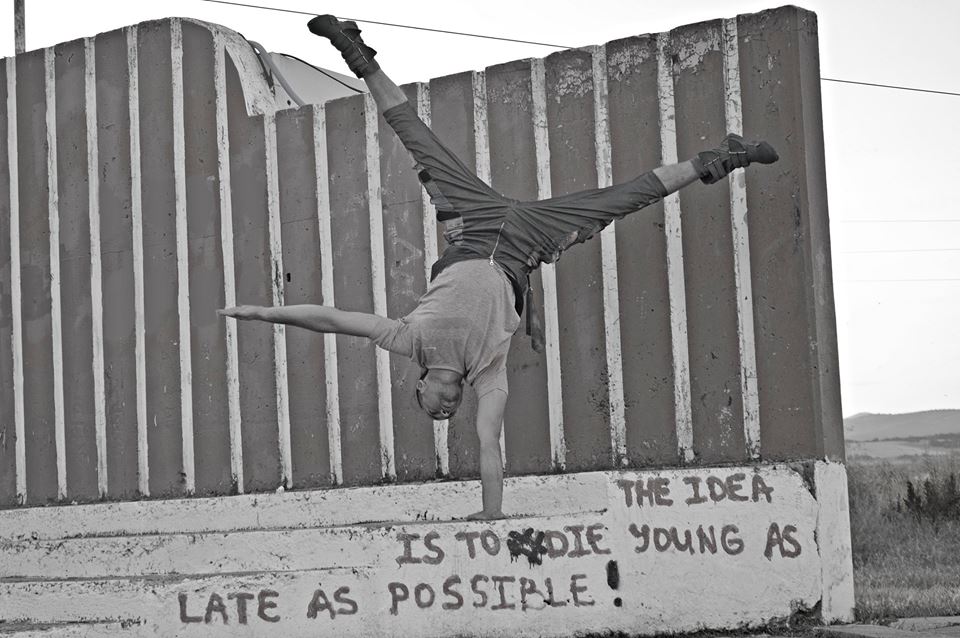 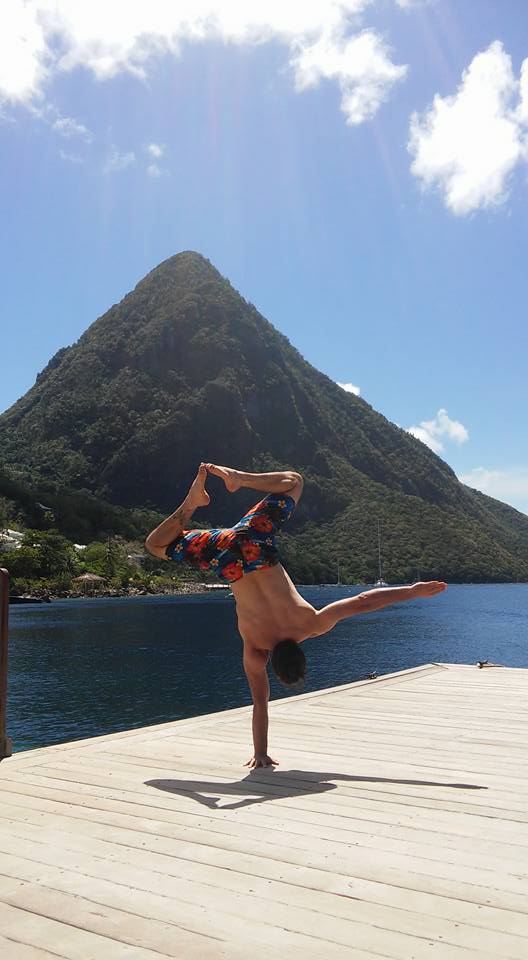 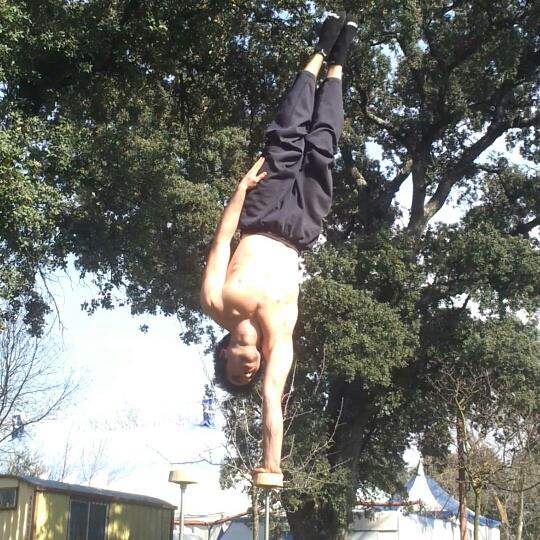 With handstands, like many other things in life, the more you learn, the more you discover how much there is to learn. Standing on one hand is just the tip of the iceberg.

Some people jump from hand to hand; spin around dozen times; do one handstand push-ups whit one hand; Stand on one finger in a bottle of champagne (I know it sounds delusional but it’s real.. check on YouTube).

Today, I am satisfied with the level I got and moved on to practice other things. I preserve the ability to stand on one hand by training occasionally and in the shows themselves.

This journey took 7 years. I could have learned to become a doctor at this time, but I chose to spend a lot of time on a video I saw on YouTube. If I haven’t developed this obsession, I probably wouldn’t be a circus artist today.

This is the biggest challenge I have taken on myself and I am proud that I did not give up.

To close the circle - I made my own YouTube video